The Kings Arms Hotel is renowned for its great selection of cask ales, there are always four on offer, as well as a resident hand pulled cider. As a special treat, join us and enjoy a pint of our exclusive ale to mark a special occasion, as the General Manager, Garry Price turns the BIG 50.

Jennings Brewery in Cockermouth, created an exclusive barrel of ‘Garry’s Ale’ to mark his birthday and to make it a double celebration, we’re donating the money raised from the exclusive 72 pints to Blood Bikes Cumbria (our charity of the year) which will raise a total of £252. 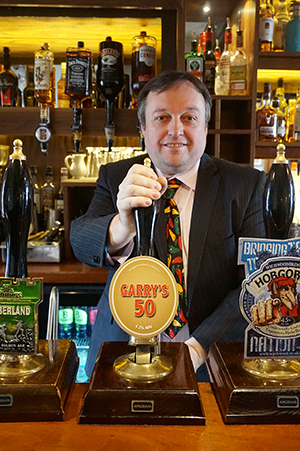 We’re proud of our Cask Marque beers, and wanted to incorporate this to celebrate Garry’s big birthday, as he has worked hard to achieve our Cask Marque status. It’s also a great way to raise some money for our charity of the year; throughout 2017 we have various fundraising events planned; our popular Royal Ascot event takes place at the Inn on the Lake in June, we’re offering the chance to win 7 nights of dinner for two people in our seven hotels, don’t miss our Monster Halloween Ball at the George Hotel and much more. To keep up to date visit www.lakedistricthotels.net/charity-of-the-year.

Blood Bikes Cumbria, is part of a nationwide organisation that provides out-of-hours transport, 365 days of the year to transport urgently needed blood, drugs, human tissue and other medical requirements between hospitals and blood transfusion banks. The charity was set up to save the NHS money which was being spent using public taxi services to provide this service.

« Becy & Joe’s Wedding Day at the Inn on the Lake

Spring Wedding Fayre at the Inn on the Lake »