September has been another good month for our chosen charity of the year; Amy’s Care, as we’ve made another fantastic donation to them for the sum of £678.

The donation is the result of two fundraising campaigns that we have organised in August and September; the first campaign saw us donate 10p from every pint of Cumberland Ale sold from 1st – 31st August in our seven hotels; the Lodore Falls Hotel and Borrowdale Hotel in the pretty Borrowdale valley, Inn on the Lake in Ullswater, The Skiddaw Hotel, Inn on the Square and Kings Arms Hotel in Keswick and the George Hotel in Penrith. Over 4,000 pints were sold; this was promoted throughout all seven hotels, an additional 5% more than the hotel group had sold the previous August.

The second fundraising event was organised by the Skiddaw Hotel’s sales manager, Maria Quigley. Maria took on the challenge to run 13.1 miles in the Great North Run, the largest half marathon in the world, Maria collected sponsorship from friends, family, colleagues and customers, raising an impressive £264, completing the run in 2 hours and 33 minutes. 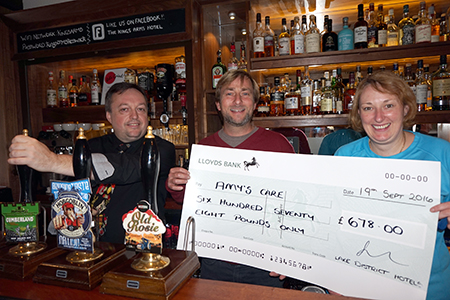 Dani Hope, Marketing Director for Lake District Hotels, commented, “Throughout 2016 we’ve hosted lots of exciting fundraising events to raise money for Amy’s Care and we’ve surpassed our £5,000 target already. I’m excited to see how much we can generate in the last three months of 2016 with the final events we have planned.”

We are now calling for the general public to help nominate a chosen charity to become our Charity of the Year 2017. Nominate your favourite Cumbrian charity, community project or initiative, act now to ensure your charity is in the running – visit www.lakedistricthotels.net/nominate-your-charity