Lake District Hotels collected three awards for their gardens at the Keswick Tourism Association and Keswick in Bloom 2015 awards ceremony, held at Hope Park in Keswick on Monday 10th August. From Lake District Hotels, the Lodore Falls Hotel had been put forward in the ‘Large Hotel’ garden award, along with the Queens Head Bar for ‘Pub’ garden of the year award.

For the second year in a row the latest additional to the family, the Inn on the Square and Queens Head bar, who both joined Lake District Hotels in April 2014, received the best ‘Pub’ of the year award. Representing the hotel and bar was Kevin O’Brien, maintenance man/head gardener and Duty Manager Dale Pitchers, with Kevin collecting the award.

John Curran, head gardener at the Lodore Falls Hotel, was named winner of the ‘Best Large Hotel’ category, the Lodore Falls have won this category 8 out of 9 times now, with this year being their 5th consecutive win. It was a pleasant surprise for John as the Lodore Falls Hotel was called out for a second time, winning the overall award for ‘Best in Association’. With a large smile on his face, John commented, “it’s fantastic to win both awards, it’s really rewarding to know that all of your hard work has paid off. I’m really pleased and I’d like to say a big thank you to Declan Robinson, who works alongside me at the hotel”.

Judy Sharpe, Chairman of Keswick Tourism Association was judging the ‘Best in Association’ award, commented, “the day that I drove out to the Lodore Falls, it was a miserable wet day and I said to myself, this better be special and of course it was. The Lodore Falls Hotel gardens are absolutely stunning”. 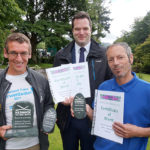 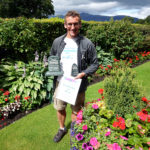 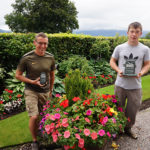 Walking with the Wounded – Walk of Britain »