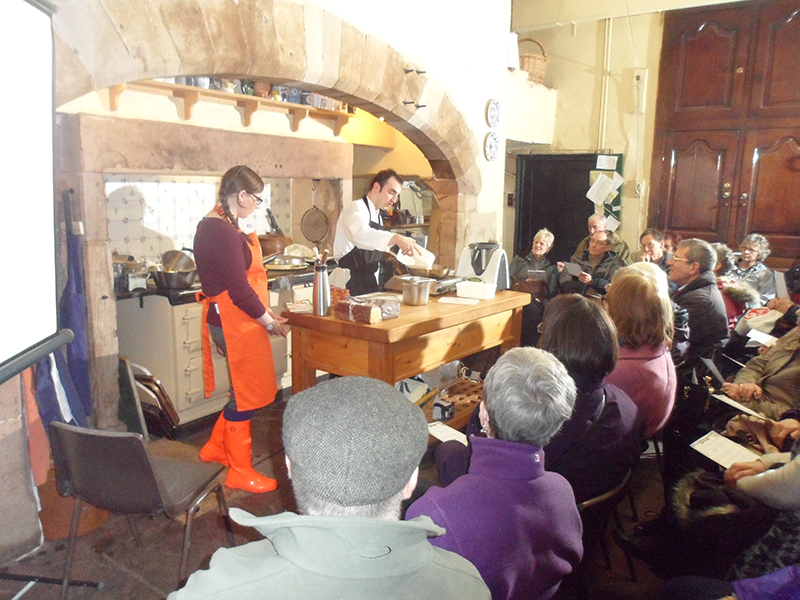 The Inn on the Lake were proud to receive an invitation to do a cookery demonstration at the ’10th Anniversary’ of the Dalemain Marmalade Awards & Festival 2015, on Saturday 28th February at Dalemain Mansion & Historic Gardens… as part of ‘Celebrating Ten Golden Years of a Renaissance in Marmalade Making & Raising Money for Charity’

James Watt, Senior Sous Chef at the Inn on the Lake was more than happy to take on the challenge and designed two dishes using Mackays Marmalade. His demonstration lasted 45 minutes and included the following dishes:

De-constructed Ullswater Sticky Toffee and Orange… using Mackays Dundee Orange Marmalade. James chose this dish to highlight the famous Sticky Toffee pudding and the standard of dishes that we produce at the Inn on the Lake.

For the dehydrated sponge mix the egg, flour, date and sugar together until smooth, add to the siphon gun and charge with 2 gas canisters, empty the connects into a microwavable container and microwave on full power for 40 seconds, take out the container and tear the sponge into little pieces and place in an oven at 60C for 45 min.

For the butterscotch mousse, boil the butter, sugar and cream together until combined into a sauce, soak the gelatine leaves in cold water until soft and add to the sauce and mix until dissolved, allow to cool, fold the whipped cream into the mix and place in the fridge until set.

For the orange marmalade gel, heat the marmalade up in a pan until hot, add the agar and blitz together until smooth, pass through a fine sieve, place in a container and allow to set in the fridge, when set place in the blender and blitz until a puree is formed, pass again and place to the side

For the date puree, boil the dates and water together until soft, place in a blender and blitz until smooth.

For plating up quenelle the mousse in the centre of the plate, add a few dots of the orange gel around the outside, smear the date puree down one side and run the dehydrated sponge down the smear. Garnish with fresh strawberries.

For the Pana cotta, soak the gelatine leaves in cold water, while they are soaking, bring the milk, cream, sugar, vanilla seeds and orange and champagne marmalade to the boil over a medium heat. Take off the heat and whisk in the gelatine leaves, allow to cool slightly and pour into the desired moulds and allow to set for 4 hours in the fridge.

For the Puree, but the jar of Dundee orange marmalade into a blender until smooth and pass through a fine sieve, add the orange juice until required consistency.

For the glass, melt the isomalt over a medium heat until clear and boiling, add the grapefruit marmalade, and spread over parchment paper, This will be very hot so be careful, after 10min it should be set like a glass, break pieces off, and serve.

Did you know?
Mackays is the last remaining producer of Dundee Orange Marmalade in the Dundee area of Scotland…  Dundee Orange Mamalade was first produced in 1797 when a local grocers wife bought some bitter oranges and boiled them up with sugar, to create the first batch of marmalade in Dundee.

A pawfect getaway in the Lake District! »