You won’t find this Cumbrian chef heating up an instant korma. Instead, imagine him cooking up some spectacular fish; it’s easy if you fry. And he likes to give peas a chance. One more? Try the salad of John and Yoko… Meet John Lennon, Head Chef at the George Hotel in Penrith. 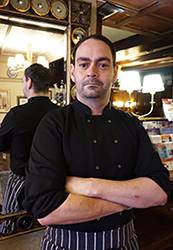 Where did your interest in cooking come from?
My first kitchen job was actually quite late – I was 17, I went to Sharrow Bay [another hotel, which is on the shore of Ullswater] as a kitchen porter. It was Michelin-starred at the time. From being a pot wash, they got me making the canapes and then I eventually became commis chef. I did one season up there.

Did you have an interest in cooking before joining Sharrow Bay?
I genuinely wouldn’t have thought I was going to go into cooking to be honest, because I was a greenkeeper at Morecambe golf club. That was my first interest, but I was only getting a small wage – it was on the Youth Training Scheme, getting about £60 a week. It’s all been worth it in the end.

Have you served many famous clients?
Cooking for famous people was part of the attraction. Paul McCartney came in – he got engaged to Heather Mills up there. It was really good to meet him; he came into the kitchen and shook all our hands. Obviously, my name being John Lennon, people used to take the mick out of me and Paul joked about it.

Who are your cooking idols?
I used to like watching Juan Martinez, who was the Head Chef at Sharrow Bay, and Colin Akrigg who’s still up there. And then there’s Michel Roux, obviously, and Raymond Blanc. At the moment I’m really into Michael O’Hare at ‘The Man Behind The Curtain’ in Leeds.

What sorts of things do you take from him?
The presentation. They must get all their plates made for them, each dish comes with a different plate, it’s amazing. He calls it avant garde cooking, it’s unbelievable. We’re nowhere near that stage, but I like that sort of modern cuisine.

How would you describe your personal style?
I try and use as many modern techniques as I can. We haven’t got massive amounts of equipment here, but we’re working on that. I’ve been using gels and molecular gastronomy: you can make a gel out of any liquid, really. I’ve just started using maltodextrin, which turns liquids into powders and crumbs; you could turn, say, beetroot juice into a beetroot crumb. I’m picking up little things like that and trying to bring them to The George, and a bit of a modern twist.

What advice would you give to the average home cook who’s looking to expand their skills and repertoire?
The gels might be a bit too much! Just get the right produce, go to the right places: there’s a lot of places you can go to other than supermarkets to get stuff, but everyone just seems to be stuck. Use local butchers more. They’re dying because of the supermarkets. Everything’s really cheap in supermarkets, but you get what you pay for.

Do you have a favourite restaurant?
I want to go to ‘The Man Behind the Curtain’ this year, but so far L’Enclume was the best, especially with the presentation. The Inn on the Lake was absolutely fantastic too.

You’ve been fortunate to work in some picturesque locations in Cumbria. Is the restaurant’s setting as important as what you’re serving up?
Definitely. When I was at Sharrow Bay, I was living in a room there and every morning I woke up, opened my curtains and Ullswater was right outside my window. For the diners, it definitely makes a difference.

What are the popular dishes on The George’s menu at the moment?
We’re just about to change the menu actually; its a seasonal thing. The most popular was a duo of lamb – lamb shoulder and rack of lamb. Other than that, the scallops; I did a salmon ravioli topped with a pan-seared scallop with a saffron cream.

How has British cooking and the restaurant industry changed since you started out?
It’s ridiculous how quick it’s changed in terms of the techniques and the presentation. Food’s a lot smaller now: you used to get these big plates, but it’s become more delicate and more refined. It’s changed a lot. You still can’t beat the classics, though; you’ll never get rid of the classics. You can just put your own twist on them really. I’m working on that at the minute, making them look different, adding gels and crumbs. We’re going to do scallops and black pudding on the new menu, which is a classic combination, but I’ve done scallops with smoked Cartmel black pudding and pickled baby vegetables and a few gels to decorate. I like little twists on things like that.