The Lake District Wildlife Park near Keswick is proud to announce the birth of a tiny Brazilian Tapir (Tapirus Terrestris). Breeding Tapirs in captivity is difficult, but the park has managed to rear two babies in two years. This second tiny tot is now younger brother to Alves, born in September 2013. After a shaky start, he is now venturing out to explore more of his home.

The park has been home to this pair of Tapirs since 2002 when Park Manager Richard Robinson collected the male called Rio from Linton Zoo and the female named Muffin from Southport Zoo. Both millennium babies, they were brought tougher to create a new UK breeding pair. Tapirs are an endangered species classified as ‘vulnerable ‘and are managed as part of the EEP Zoo Stud Book, they are also very difficult to breed in captivity.

The park has extended the Tapir enclosure, creating more secluded space down by the river. This encouraged the pair to breed and the first calf was born in 2013. The park new Muffin was expecting again this year and visitors to the park were delighted to be able to see Muffin give birth.

The tiny tot had a shaky start and received special attention for a few days from the Keeper, but he is now doing well, venturing onto the park, to the delight of visitors.

Richard Robinson said “We’re very proud of Muffin; she’s taken motherhood in her stride and is very calm. Our new baby took a few days to get going, we needed to give him some help feeding but he’s really doing well now and has already developed a strong personality. He’s curious and has a mind of his own, so we think he will be quite a star. He is quite striking to look at – all Tapir babies are born with spots and stripes – great camouflage when out in the forests of Brazil. This youngster has some great markings, but as he gets older they will fade.”

“We’re now looking for a name, something to reflect his Brazilian origin. The Olympics are being held in Rio, Brazil next year, but as his Dad is already called Rio, we’re looking for something different. All suggestions are welcome.”

Muffin and Rio have been one of the top ten favourites at the park since arriving and the latest addition to the family is set to keep them firm favourites with visitors – especailly6 in the run up to the half term holidays. 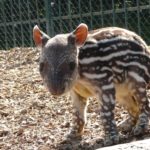 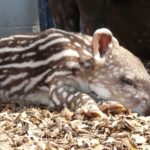 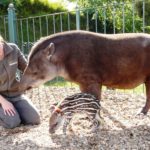