This year’s World Tapir Day on Wednesday (27th April) is an extra special celebration at the Lake District Wildlife Park (LDWLP) near Keswick. The park has a family of four Brazilian Tapirs, one of which is set to jet off to foreign climes. The LDWLP celebrates World Tapir Day every year, but now the breeding pair has successfully reared two calves, it’s the first time there is a family of four to share the day with visitors. It’s also a last chance to see Alvez, (the first calf), because he’s set to travel overseas to start a family of his own.

Wednesday 27th April is the special international day of recognition, held every year to raise awareness of the four species of Tapirs in Central and South America and South-East Asia. All Tapirs are in decline and their plight is symbolic of the wider threat to their natural habitat in the rain forests.

Muffin and Rio (Mum and Dad) are Brazilian Tapirs, they were millennium babies, brought together at the LDWLP in the hope they would breed. In 2013 a young male called Alvez was born, with a second male calf born late summer 2015 and named Zico.  Now Alvez has matured, it is time for him to move on to a new collection to be paired with a female. Due to leave in the next couple of weeks, Alvez is heading overseas to a zoo in a warm climate.

Keeper Leanne Harrington has been looking after the Tapir family since Alvez was only a matter of weeks old.  She has watched both Alvez and Zico grow, developing personalities of their own. Leanne said “Alvez was quite a Mummy’s boy when he was younger, sticking close by for a long time. Now he has minutes of madness, running around his enclosure. In contrast his little brother is very independent already.  Alvez is quite tolerant of his brother who has a cheeky habit of nipping his older brothers’ ankles.  They both love having their backs scratched which is great for park guests taking part in Keeper Experiences.” 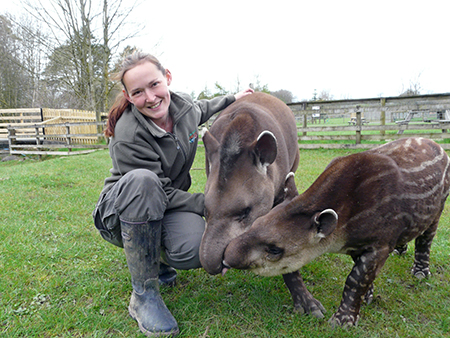 Leanne with Alves and Zico

To commemorate World Tapir Day and the imminent departure of Alvez, the park is introducing special mini experiences for visitors to the park on the Bank Holiday weekend. At 3pm on Saturday, Sunday and BH Monday, there will be chance for guests to treat themselves to a fifteen minute encounter with the tapirs, chance to tickle their tummies and find out more about conservation of the species. (Each fifteen minute session costs £10 per person, with the money raised going towards new enrichment toys like feed balls and quine balls. The special sessions can be pre-booked by calling the park, or asking on the day.) 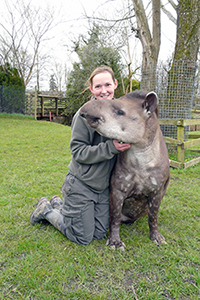 Richard Robinson, Park Manager said “We are members of BIAZA – the British and Irish Association of Zoos and Aquariums and part of the European breeding programme which allowed us to breed our tapir youngsters.  They’re a very popular exhibit and it gives us a platform to highlight the BIAZA joint conservation project with the World Land Trust (WLT) who is buying land in the Coastal Atlantic Forest of Brazil to extend the existing 16,000 acres of protected Reserve.”

The Lake District Wildlife Parks tapir family are the first animals that guests meet on the unique ‘Keeper Experience’ where they have chance to groom the tapirs, before meeting Meerkats and Lemurs.  The experience has proved popular and was sampled by Coronation Street star Tina O’Brien (Sarah-Lousie) who loved tickling Muffin when she and her daughter visited.

To find out more about the tapirs and other animals visit the website www.lakedistrictwildlifepark.com or to pre-book a bank Holiday Tapir experience call 017687 76239.