The Queens Hotel is located in the middle of Keswick and was built in 1825. It has 35 en-suite bedrooms, a lounge bar and the Queens Head Café Bar. For over thirty years it was owned and run by the Peter and Catherine Williams who entrusted the management of the hotel to daughter Rebecca and son-in-law Paul Grindley when Peter sadly passed away.

The sale of the Queens Hotel to Lake District Hotels Limited means the ‘Queens’ will continue to be a family led business. The purchase was managed by Daniella Hope, Marketing Director of Lake District Hotels. Alongside her parents Kit and Charles Graves, this family team already own and run six other hotels, this latest hotel addition is the magnificent seventh.

Daniella said “Keswick is our heartland and we’re very excited about the potential that the Queens Hotel offers. We already have two other Keswick hotels, but we feel the ‘Queens’ proposition is different and complimentary. It currently provides good bed and breakfast accommodation, with the Queens Head Café Bar at the back offering lunchtime and evening meals. It is a magnificent building and we will be investing substantially in a refurbishment programme later in the year to really make the most of its assets.

The ‘Queens’ offers something new to our portfolio and we’re keen to attract a younger market, especially when you have so many ‘active’ attractions on our doorstep from zip wires and kayaking to the new Ice Climbing Wall. Cumbria Tourism’s marketing objectives for the next four years include increasing the number of younger visitors by 10%. To achieve this they are targeting the ‘Career & Kids’ segment’*, it is an area we are keen to develop, there’s a gap in the market and we feel it will really benefit the town too.  The Queens is perfectly positioned to capture more of that market and we are excited about our plans for the future.”

Daniella has appointed a General Manager Mark Webster to help take over the management of the hotel and the Queens Head Café Bar. “It’s very much business as usual through the summer whilst we plan for the refurbishment in the Autumn which will of course, make the most of the hotels existing charm.”

Having moved back to the Lake District in summer 2011 to join the family business, Daniella is looking forward to integrating the Queens Hotel into the fold. “It’s exciting to be given the opportunity to stamp my own mark, and as a representative of the younger audience we are trying to attract, I hope we are part of the catalyst that encourages more young people to come to enjoy Keswick.” 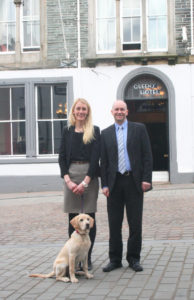 « It’s going to be a Smashing Easter

Visitors Giving: Back to Nature »