Howzaaat! For a game of cricket!

Our annual cricket match against Keswick Cricket Club took place last night (Thursday 26th July) and what a night it was. It’s been an absolute pleasure for Lake District Hotels to sponsor Keswick Cricket Club and each year we look forward to our annual match. We all had a great time and we’re over the moon to have won the match. A big thank you goes out to all of the staff that took part and to everyone that joined us to support our team!

This year marks our fifth year of sponsorship for Keswick Cricket Club and as with any business deal there needs to be a little bit of fun included. The score board was sitting at 2-2 from the last four years, so the pressure was really on last night for both teams.

Over the past few weeks’ our dedicated employees have taken time away from the hotels to practise for the big match, our players were joined by friends and work colleagues to watch and support our team play a proper game of cricket. 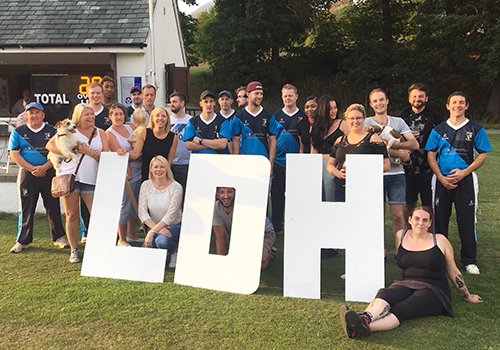 Lake District Hotels innings started well, resulting in the team claiming victory over KCC with a final score of 124 runs. Team spirit was high and the two teams enjoyed pie & peas inside the club house, supplied by Keswick Cricket Club. After which an awards ceremony was carried out by Leah Davies (Marketing Manager for Lake District Hotels) to hand over the cup trophy and highlight a few of our top players. Team captain, Gary Wilson (Inn on the Lake General Manager) was awarded ‘Best Fielder’, Isaac Marsden (Skiddaw Hotel Food & Beverage Assistant) received ‘Best Bowler’ and Darren Love (Inn on the Lake Restaurant Manager) got ‘Best Batsman’.