Turning pints into pounds for charity

Throughout August, you might have seen the following message around our hotels – ‘buy a pint and we’ll donate’. With the aim to raise money for our charity of the year, by encouraging locals and visitors to the area to buy a pint of Cumberland Ale, which has become a firm favourite nationwide and is Jennings Brewery best-selling brand outside the Lake District.

As part of this Cumberland Ale promotion, we donated 10p from every pint sold from 1st – 31st August across all of our hotels and bars; the Lodore Falls Hotel and Borrowdale Hotel in the Borrowdale valley, Inn on the Lake in Ullswater, The Skiddaw Hotel, Inn on the Square, Kings Arms Hotel, Back Bar, Casa’s Sports Bar and The Loft Nightclub in Keswick and the George Hotel in Penrith.

4,441 pints were sold, this was promoted throughout the hotels and bars, beating the total sold in August 2016 by an impressive 301 pints; raising £444 for our charity of the year, Blood Bikes Cumbria.

Cumberland Ale is one of our top sellers so it seemed only right to include it in our promotion. We always have a selection of cask ales available across our hotels and bars, so if you are passing why don’t you join us for a pint. 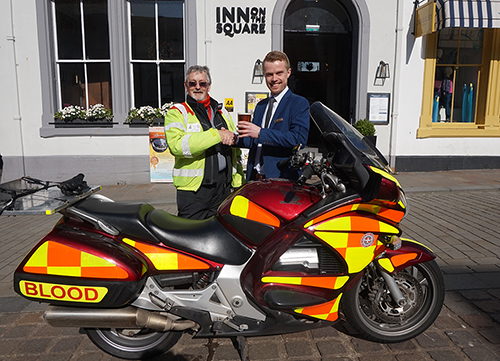 From the 1st January 2017, we have been raising money for Blood Bikes Cumbria, to view the total raised click below